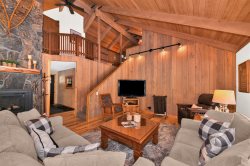 Why We Love Sunriver Sunriver, Oregon, is a resort town in the Deschutes River valley, a snaky watershed that divides the Eastern Cascades volcanic zone from the high desert in the east. It’s a dry landscape, dotted from the air with those surreal circular crop fields that look like the work of UFOs. To the west, the Deschutes National Forest lies between the river and the chain of volcanoes that includes Mount Bachelor and the Sisters. Vast flows of lava mark the landscape where the subduction of the Juan de Fuca plate under the North American has pushed up magma over the ages.

Just north on Route 20 are two great educational stops that contextualize this area: Lava River Caves and the High Desert Museum. You’ll want to dress warmly and bring a flashlight for the former, while the latter is a perfect introduction to the region’s history, as well as its natural features. Both “Old West” colonization and an Indigenous-curated, up-to-date take on Native history are there in state-of-the-art detail. Plus, there are otters and raptors (the bird kind, not the “Jurassic Park” kind) that scientists help recuperate from injuries so they can return to the wild. There’s also the Lava Lands Visitor Center and the Newberry National Volcanic Monument, where you can make a spiral climb up an almost perfectly conical cinder cone. These pyrotechnic wonders are within a few miles on the same road. If you look at them from above, you can see how the Deschutes River snakes around the wavy edge of the lava spill that cone smeared across the valley. And you can’t miss this feature from the ground either: Plants have just barely started to recolonize the expanse of sharp black rock, which is broken only by the oddly straight line of a railroad (I wouldn’t have wanted to lay that section of track).

If you don’t have time or your kids don’t have the patience for a museum, you can do a bit of self-education before or after your outdoor explorations of caves and lava flows, by just chilling in your accommodations with maps and videos. In the late 1950s, the Oregon Department of Geology and Mineral Industries teamed up with the USGS to produce beautifully colored maps of the region’s various rock formations. The story behind the area’s volcanism is totally epic; you can get a sense of how storied the landscape is by flying over it on Google Earth in 3D (try tilting the map and playing with the altitude to really see everything). This is a great exercise either before or after you’ve seen these amazing features from the ground. If your curiosity’s aroused and you or your kids want to know how in the heck this bizarre landscape got here, technology’s got you covered there too: from the goosebumps-inducing big history version to the geology grad student version.

A bit further afield from town, Crater Lake National Park has spectacular views, and the very fit can attain them by bicycle by riding the Rim Drive. The shockingly blue lake in the moon-like crater with a volcanic cone in the center is the product of one of the area’s most recent eruptions. A mere 7,700 years ago, it was no doubt noted by Native Americans.

Explore much further afield by visiting the Oregon State Observatory at Sunriver, which advertises “billions and billions of sights to see,” from our own sun in the daytime to distant galaxies at night.

Wait, you came to Sunriver for something besides a mind-bending experience of geologic and cosmic processes? Oh, why didn’t you say so? There are plenty of restaurants that tend to skew pub and American. For a classy date night, you probably want to look at South Bend Bistro, a French wine bar. As is typical of the region, you can’t turn around without bumping into a row of dozens of craft beer taps.

Then there’s all the water: tubing on the Deschutes (either lazy or white-water) and splashing and water-sliding at SHARC (and many of our homes come with year-long SHARC passes), a big water park in town. But it’s so much more than swimming: There’s disc golf, rock-climbing in adjacent Paulina Park, winter tubing, and a basketball court.

Finally, for the culture vultures, there is an art gallery in Sunriver that boasts, in addition to the expected dog-horse paintings, pretty cool pottery, woodworking, and even abstract sculpture. And yes, they have a paint-and-sip. So from the ephemeral amateur creation to the awesome brush-strokes of geology, Sunriver has something for everyone.