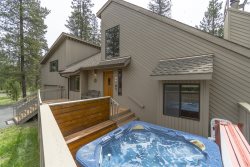 To say that Sunriver's history started with a bang would be an understatement. The story of this much-loved resort community south of Bend began with millions of bangs that shook the world, built mountains, and left massive craters during a volcanic period that lasted thousands of years.

Sunriver sits alongside a portion of the 700-mile chain of volcanoes known as The Cascades, a platform of molten rock and ash that today climbs more than 14,000 feet into the sky. The Cascades include these peaks: Mount Hood, Mount Jefferson, Broken Top (a dormant volcano that blew long ago), the famous ski destination Mt. Bachelor, the Three Sisters (named Faith, Hope, and Charity), and Mount Mazama, another dormant volcano that blew long ago creating our now famous National Park, Crater Lake, with its once tall peak now sitting in the water and known as Wizard Island.

There's also Mount St. Helens, a volcano that had its last eruption during the Regan administration. Last but not least, don't forget the Newberry Volcano, a 1,200-square-mile shield volcano that you spend the night on top of when you book your next stay with Cascara Vacation Rentals.

Volcanic eruptions start when magma — a semi-liquid mixture of minerals, sulfur, and dissolved gases like carbon dioxide and water vapor — seeps out of the Earth's core and slowly bubbles up through vents in its crust. Pressure rises when magma forces the air that used to be in those vents toward the Earth's crust. Just like an overinflated water balloon, when that pressure gets too high, the vents will spray their contents all over the place.

Volcanic eruptions also happen when the super-hot magma comes into contact with water and sends a plume of steam into the air with the pressure of an enormous tea kettle. This magma becomes lava when it escapes the Earth's crust, and that lava turns into igneous rocks like basalt, pumice, and obsidian when it cools.

Central Oregon's landscape is full of places where you can pick these rocks up, feel surfaces that are either smooth or rough like sandpaper, and measure their density by comparing their size to their weight. Many of these places are within a quick drive of your Cascara Vacation Rental home in Sunriver. They include:
All four of these places are part of the Newberry National Volcanic Monument, a 57,384 chunk of federally managed land that crosses U.S. Highway 97 less than three miles from the Village at Sunriver.

During its prime, the Newberry Volcano reached heights of 12,000 feet and 17,000 feet above sea level. It may have been the highest peak in The Cascades. During its 500,000-year-long explosive history, this volcano spread fire and ash over 1,200 square miles and sprouted at least 400 cinder cones and volcanic vents like plants in a garden.

But the Newberry Volcano ran out of steam after its last eruption — which hit present-day Idaho with a blizzard of ash 1,200 years ago — and the walls of its empty magma chamber came tumbling down. That's why it’s called the Newberry Caldera. Inside this caldera, you can find a few other prehistoric destinations to visit on your next trip to Sunriver:
The Newberry Caldera is also home to a human-made shelter that a construction crew found buried under four feet of ash and pumice when rebuilding a road. The remnants of this structure date back 9,500 years, making it one of the oldest homes in the United States.

The stories of the region's first people and the settlers who arrived on the scene more than 100 years ago are just as much a part of Sunriver's history as the volcano it sits on. Central Oregon's landscape is dotted with their places of interest that you can visit while staying with us in Sunriver.