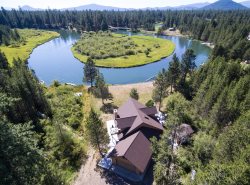 The History of Sunriver, Oregon

If you have ever vacationed in beautiful Sunriver, Oregon, and the surrounding area, you have likely been blown away by the region’s stunning landscape, as well as the fantastic vacation and resort-style amenities the towns of Sunriver and nearby Bend can provide for visitors. Sunriver is such an ideal getaway spot, it may be difficult to imagine the town was anything but an escape from the hectic qualities of everyday life and a wonderful opportunity to enjoy the great outdoors via hiking, biking, skiing, snowboarding, and all other manner of recreational activity. But, surprisingly enough, Sunriver and its surrounding area was not always the vacation paradise it is today. Read on to learn more about the history of Sunriver and gain a greater appreciation for this beautiful gem of central Oregon.

How Did Sunriver Get to Be So Pretty, Anyway? Sunriver is a truly unique vacation spot – its hiking is unparalleled, and it is home to one of the world’s most hidden gems when it comes to ski resorts. How did such a marvelous place even come to be? About 7000 years ago, the volatile mountain now known as the Newberry National Volcanic Monument erupted, spewing thousands of tons of lava into the central Oregon area. This lava hardened and formed the famous Lava Lands, one of central Oregon’s most prominent tourist attractions. The lava also served a greater purpose: it effectively backed up the Deschutes River around the Benham Falls area, and this backup created a massive lake. Eventually, the river was able to overpower the lava and push through the backup. This increased river flow drained the giant lake, but the moisture the lake left behind led to the incredible lush plant life you can still admire in the Sunriver area today.

Who First Settled the Sunriver Area?

Native indigenous populations were drawn to Sunriver for the same reasons tourists visit the region today: it is simply stunning in its beauty and bounty. A number of archaeological discoveries and artifacts in the Sunriver area prove that native peoples lived in what is now Central Oregon for thousands of years before Europeans ever arrived. The first Europeans to visit the Sunriver area (the original tourists, if you will) were John C. Fremont and Kit Carson, the famous explorer and his guide. European immigrants first began to live in the area near the late 1800s, when the beautiful green expanses proved irresistible to cattle ranchers seeking to feed their herds. The region remained primarily ranch land for many years.

Was the Sunriver Area Ever Used for Anything Besides Ranching and Recreation?

As a matter of fact, the Sunriver area was once used for something much bigger than ranching and recreation, and it may surprise the gentle vacationers who frequent the region today for its pure beauty and simple lifestyle to learn about this one particular aspect of the Sunriver area’s past. In the earlier years of the second World War, after the United States of America had entered the fray, the United States Army was anticipating encountering the Axis Powers on foreign soil, in terrain that would be unfamiliar to most of their soldiers. The Army wished to better prepare their fighters, so they began scouting the entire United States for a place that topographically resembled the terrain of Northern Europe, where they would most likely be battling Hitler’s forces. It was determined that the region surrounding what is now Sunriver, Oregon – home at that time to a bunch of cattle ranchers – most closely resembled the climate and geographical layout of the region where German and American armed forces would be facing off. The United States Army commenced building what became known as Camp Abbot, a training ground for combatants that would train would-be soldiers in shooting, field maneuvers, and other basic combat skills on ground that supposedly looked and felt just like the forests of Northern Europe. Building began in 1942 and ended in 1943. Camp Abbot was fully operational for about a year and a half, and over ninety thousand soldiers in the United States Army trained there during the time it was open. The camp was closed in 1944 and ultimately completely deserted. What Ended Up Happening to All Those Buildings?

Several of the remains of Camp Abbot are actually still viewable and usable by the public today. The most notable is the old Officer’s Club, now known today as the Great Hall that is owned and operated by the Sunriver Resort. The building still retains much of the original look and feel of the old Officer’s Club, and it is a fun historical site to explore. As for the rest of the buildings, most were demolished and a good portion of the land Camp Abbot was built on was returned to the United States Forest Service, though another large chunk was sold to private owners. Over the course of the next 70 years, the land in the Sunriver area has changed hands multiple times and bounced in between private and public ownership. These days, the bulk of the land is owned by developers and private homeowners, both those who live primarily in the area and those who enjoy the Sunriver region from their second home.


It is probably surprising to those who enjoy vacationing in Sunriver that the land could ever have been considered too remote for anyone besides hardy cattle ranchers, or that the United States Army officers looked at the lush, beautiful forests, and determined that this area would be the perfect place for their soldiers to learn how to survive in the wilderness. But both of these facts made it possible for Sunriver to become the vacation paradise it is today, appreciated and celebrated by all visitors. Sunriver’s rich history continues to this day, and it is guaranteed to be a beautiful getaway spot for people from all walks of life for years to come.